The Black Woods contain darkly gnarled trees born from the seeds of sorcery, strange plants given unnatural life from the fertilizing spread of decaying magic, abnormal soil deeply contaminated with the residue of the Alchemy Wars from decades long past. Pockets of Black Woods have sprouted all over the world of Teradynea in isolated growths of midnight-black trees, most of these unexplored parcels of poisoned land still shrouded in secrecy. The tainted flora and fauna that sprout and flourish within these areas of permanent shadow contain mysterious powers that can be harvested and gathered for good. Or for evil.

What secrets do the Black Woods hold? Rin and his friend Joktala will soon discover that the Black Woods contain a hidden danger far more perilous than any they could have ever imagined…

Book One in the Death Gems Series 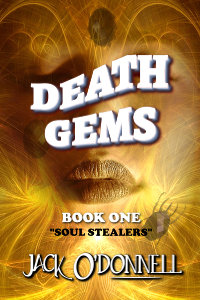 Soul Stealers choose to use the dark powers of the death gems to steal the souls of innocent victims and use their life-forces to escape death. Junto Kral and his group of Extractors are determined to rid their world of this deadly menace — but as they learn more about the underbelly of these forces they realize just how overwhelming their job truly is…

Book One in the exciting new Death Gems series!